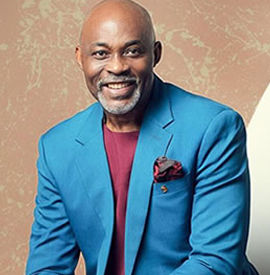 Richard Mofe-Damijo, RMD as he is widely known and fondly referred to as, is the biggest male actor to come out of Nigeria in particular and Africa as a whole. He has starred in well over 60 movies and TV Series locally and internationally.

A Creative Fire-brand, RMD wrote for several prestigious newspapers and publications including Concord and Guardian. In his early 30s he published Nigeria’s first all-gloss magazine for men, ‘MISTER’ which he sold for several millions at 33 years old. A man of many parts, RMD is a Writer, Lawyer, Creative Content Creator, Producer, Life-Coach, Public Speaker, Showbiz Impresario amongst other talents.

In 2008, RMD was called to serve in government in his home state, Delta State, Nigeria, 1st as a Special Adviser to The Governor and subsequently as The Honorable Commissioner of Culture and Tourism.
The fact that RMD was greatly missed by fans all over the world is clearly seen in the way he broke the internet when he returned to the scene and reactivated his social media accounts. Since his return to the scene RMD has as always, been the toast and desire of not just fans but journalists, photographers, stylists, brands, writers and film makers. RMD has since his return to acting in the past year travelled the world starring in TV Shows, Movies, TV commercials and representing Nigeria in the global scene of which the 007 SPYFIE, is one. Having endorsed many brands in the past, RMD is presently brand ambassador for Africa’s largest and fastest growing telecommunications network.

RMD owns one of Nigeria’s foremost PR outfits WHITE WATER LIMITED® which he still actively runs alongside his production company RMD Productions Limited®, owners of RMDTVNG® and RMDTHEACTOR®.  RMD has received numerous prestigious awards and recognitions all over the world. RMD studied Theatre Arts at the University of Benin and also has a Law degree from University of Lagos and was called to the Nigerian bar in 2005.