The Girl Child, Education and Security: A Call to Action 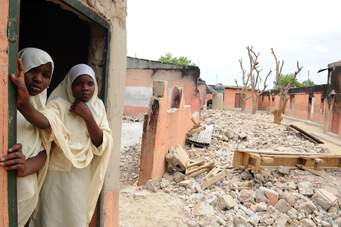 The Chibok school abduction is a reminder that school children remain vulnerable to attacks and abductions by Boko Haram fighters in Nigeria’s terrorized northeast region.
The lack of information on the whereabouts of 112 of the schoolgirls, for the past 5 years, as well as hundreds of other children abducted from Damasak, draws attention to the continued suffering of their families and the continued risk of new abductions.
The incident which happened on April 14, 2014, where 276 schoolgirls were abducted from the government-owned Chibok Secondary school in Borno State caught the world’s attention and sparked a campaign for their release. Human Rights Watch research, however, showed that Boko Haram’s abductions of women and girls began even before the Chibok incident and have continued. According to UNICEF report, the group abducted more than 1,000 children between 2013 and 2018.
Nigeria announced the Safe School Initiative in 2014 with an initial fund of 3.2 billion naira (US$10 million) from the federal government and private donors to ensure a safer school environment for children, especially in conflict areas. Nigeria also endorsed the international Safe School Declaration in March 2015, as a commitment to ensuring that schools will be able to continue to operate during armed conflict. In December, the Education in Emergencies Working Group under the Education Ministry submitted a proposal to the Defense Ministry to amend the Armed Forces Act to ban requisitioning schools or universities to billet or accommodate soldiers.
In spite of these efforts by both the government and private sectors, the big question is: Will the girl child feel totally secure going to school without fear of the unknown?